Garlic Is Driving Me Wild!

My onion sets (Red Baron & Sturon) arrived this morning, along with four garlic bulbs ( two each of Albigensian Wight and Lautrec Wight). It's all been sitting next to me, in its padded envelope, on the sofa whilst I catalogue it on Folia...and it's making my tummy rumble something rotten!

Torture I tell you!

The scent from the garlic is so strong - I'm sorely tempted to just go and bake one bulb and turn the other into garlic bread! Fortunately, I have some of this year's garlic harvest sitting in my kitchen, so the new stuff is safe. For now! Probably best to get it in the ground at the weekend! :-)

Weeding and seeding...and some great news!

Saturday 10th October:
Well, the first thing I have to say is that only three hours of gardening so soon after having ‘flu absolutely knocked me for six! Nevertheless, we still got quite a bit done, although not as much as I’d planned. Ho hum.

The Regiment had been over the weekend before – whilst we were away in York – and tidied up the grassy parts of the garden, plus cleared the orchard area and built a delightful little wattle fence around Bed #2. Spiffing!

Our priorities were to get at least two more beds dug out, dig over Beds 3 & 4, weed, and get the peas and beans in. Amato mio dug over the beds only to discover some building remains about 6" down in #4! As it is probably Elizabthan, we decided not to emulate Time Team but to leave it be, and only plant shallow rooted varieties in there!

Since the broccoli in Bed 1 was not authentic and had also been munched to near-death by critters, we decided to take it out. We also got rid of the aubergine because it’s now far too late for it to fruit…it had only just come into flower! In their places, I sowed some land cress and broadcast mustard. I think I shall be thinning the turnips next weekend, and possibly getting a second radish harvest.

Bed 2 was a joy to work on; it just needed a little tidying up, and I couldn’t resist taking a photo! Next weekend, I shall be thinning the kale.

In Bed 3, I sowed Aquadulce broad beans, Meteor peas, and some winter butterhead lettuce. Haven’t put anything in #4 yet but am hoping to get some plants in over the next week or so. Kevin marked out Bed 5 but his back was aching, so we thought it best to quit whilst we were ahead! Will be full steam ahead this weekend however, because we should have some brassicas and leeks to go in (I was too late to sow any, so have bought in plants).

Also transplanted three decent size feverfew bushes and a tiny one from the dye bed to the herb garden.
October 14th:
Today I received some Carlin peas from Manda at http://www.catstripe.co.uk/ . I’d emailed her after reading on her blog that she’d been growing some Carlins (very popular in the 17th C), and asked if she had any to sell or swap. She very generously sent me 95 seeds and said to ‘pay it forward’ next year instead of sending something to her! How wonderful! I love gardeners!

The best news is that today I also received my Heritage Seed Library membership pack! Can’t wait to be able to order my six packs of seed! I’d like to eventually become a seed guardian but that’s going to be a way into the future…I’d like to get an allotment first. Or perhaps access to Holdenby’s kitchen garden! Heheh! 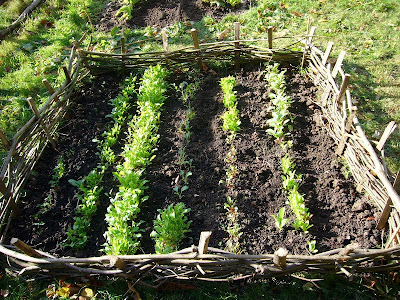 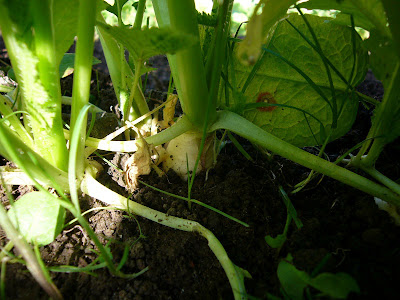 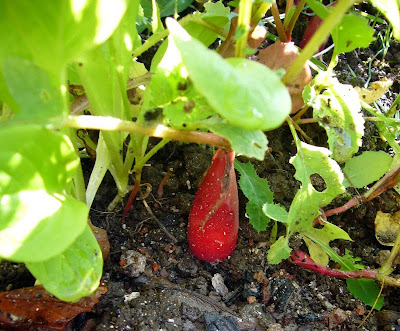 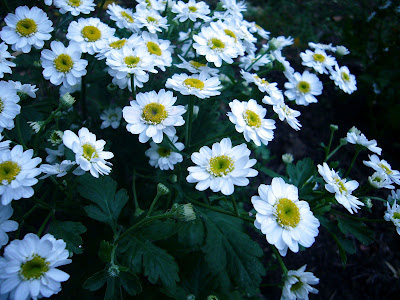 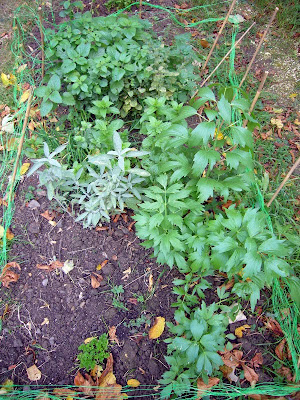 It's been far too long since my last post...but there has been good reason. During the last few months I've been working on corset and wedding gown orders, knitting, researching historical foods....and digging. Lots of digging!


Back in May this year, amato mio and I were at the Holdenby House* Garden Show; we were supposed to have a PermOrganics stall there but unfortunately we didn’t have enough ready for it, so we decided to go along to the show anyway.


Whilst wandering around, we happened upon a sign, pointing us in the direction of a cruck house farmstead…so off we went to explore! When we got there, we discovered a reconstructed 17th century cottage (although not a true cruck house) and a very neglected garden. We both thought it was a shame that such a place was so overgrown, so noting the contact details of the people responsible for its upkeep, we resolved to get in touch!


Although the cottage is within the grounds of Holdenby, the owner (James Lowther, descendant of the Duke of Marlborough) has given over the care of it to a regiment of the Roundhead Association (oh, the irony!).


We got in touch and had a meeting with them the day before my birthday. The day after my birthday, we began work on the garden! Four of the regiment (the Earl of Essex's Regiment of Foote, which we've now joined to do some Living History with) came over to help clear the land, and together we made good headway.


Since then, we've dug four food beds (planted and sown two, with more to be done today) and one for herbs at the front. The plan is thus;
Fortunately, I have a wealth of information regarding what was grown by the common person during the mid-17th century, plus I have loads of recipes (which fill in the gaps). I also have a facsimile of a 17th cent. seed catalogue!


At the moment however, we’re concentrating on getting the land working, so have put in things from our garden (pepper, aubergine, broccoli) for now but come spring next year, we’ll be growing heritage/heirloom crops!


The best thing however, is how much amato mio has got into this! He’s never been a gardener but now he’s really keen, and even nips up several times a week by himself to check how things are and to do a bit of groundwork! He’s even making suggestions as to what we should be growing! I love how engaged he's become with this!


The rest of the regiment has been great; they organised a work party to go over last weekend (when we were away in York), and have offered to do a lot of the heavy work which I can’t do very well because of my back. They’re also going to be doing some repairs and restoration to the cottage. :-)


Long-term, we’re hoping to be able to get all the repairs to the cottage done, put some more appropriate furniture and tableware inside, and do some living history there. Holdenby has visitors to the gardens every Sunday in the summer, so it would be great to be able to give them a glimpse of 17th cent. country life! In addition, local schools visit, so I want to put together some fact sheets, and perhaps even some worksheets too (plant identification etc.). 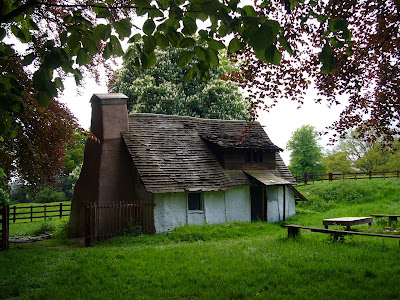 These two photos (above and below) are pretty much as we first saw the cottage in May... 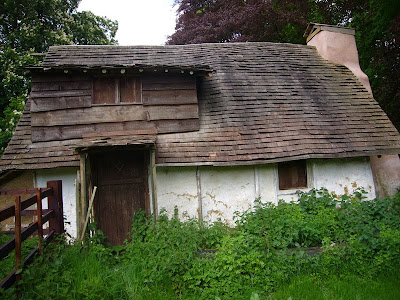 Below: By August the first three beds had been dug. From the right of the picture; two beds have crops growing away nicely (although something decided to dig up the carrots in the bed on the far right!). 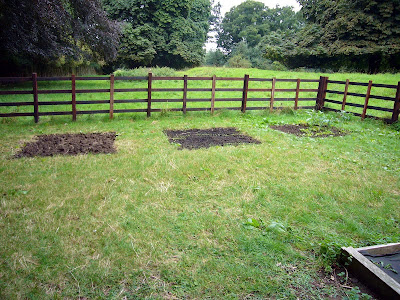 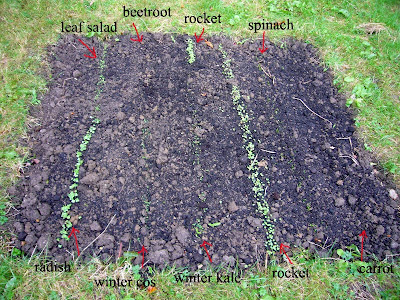 Above: Bed #2.
Below: The herb bed at the front of the cottage (well, the half of it which has stuff growing!); I have plans to extend it out into a more pleasing shape but it can wait - there's no hurry! 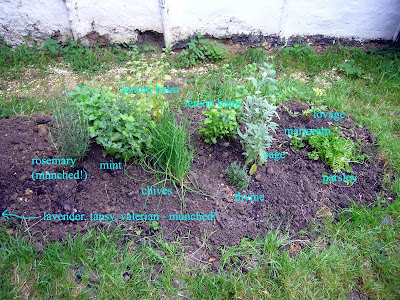 Today the plan is to get the broad beans into bed #3, dig over bed #4 and make a start on the other beds in preparation for getting in the cabbages, leeks, kales, onions and garlic. Once they're done, we'll move over to the dye bed!


*(Holdenby is a stately home, built in 1583 by Sir Christopher Hatton, Elizabeth I's chancellor. At the time it was the largest privately-owned house in England. After Hatton died, the house passed to James I and then to Charles I. During the last English Civil War, Charles was kept there under house arrest (1647), and at some point shortly after, the house was sold to a Parliamentarian who reduced it to the size it is now – still pretty large, despite being only an eighth of its original size! After Charles II came to the throne, Holdenby went back to the Crown, and in 1709, it was bought by John Churchill, Duke of Marlborough. It’s been passed down the female line ever since.)
Posted by Unknown at 08:46 5 comments