Excuse me while I scream...

Last weekend my HP laptop started crashing, so I took it to the repair shop on Monday morning. After running diagnostics, they determined that the HDD was failing, so they installed a new one. It cost me cost £160, and was fixed the same day. Yay. Or so I thought.

Within half an hour of getting it home, it was crashing again, so I took it back the next day. Got it back on Tuesday evening, and it ran ok for a few hours.....and then crashed as soon as I wanted to do anything graphical (in this case, load up Stronghold Kingdoms, which is an MMO I'm working on).

I couldn't get to the shop on Weds as I had several client meetings, so it went back on Thursday morning. I suspected it might be the GPU, which would mean a whole new motherboard, because, as I'm sure you know, on laptops, the graphics processor is integrated into the motherboard.

Sure enough, on Friday when I spoke to the repairman, he told me it was the GPU, which would cost in excess of what the laptop was worth. He said he'd part exchange my HP (which cost me £350 two years ago), so yesterday I went along to the shop to see what he had that close in spec to the HP.

He had an Acer within my price bracket (I've had so much to pay out recently, I can't actually afford a brand new machine at the moment). Apparently the screen had got broken, so rather than pay to have it repaired, the previous owner decided to trade it in. It now has a brand new screen, and everything has been checked and apparently found to be good working order. I paid £200 for it, which seems reasonable.

However, it is actually very slow, especially compared to my HP, and I think it must be because of all the dren that's pre-installed on it. Apparently it was a Home Access (educational) machine (our government had the not-so-bright idea to give every child at school in the UK a laptop because I assume, it was more headline-grabbing than spending the money on improving our failing education system). This means it has a shedload of rubbish pre-installed on it, which I cannot get rid of because I need passwords from the BECTA control centres. Since I don't have any activation keys, I cannot access the control centres, so I cannot uninstall any of this merda on this machine. In addition, BECTA (which was the government body responsible for this initiative) no longer exists, and despite several telephone calls yesterday, I could not get anyone to give me an activation or access key. All I kept getting told was;

Nobody had the slightest interest in me telling them that it had been broken, and that I bought it reconditioned from a reputable repair shop.

And if it's not enough that I have gazillion gigabytes-worth of school programs on there, there's a frelling net nanny too, so I cannot even access the internet because......oh look, I have no access code to input. I did manage to briefly get around it by going into the control panel and changing the home page but it soon got wind of my deviousness and foiled my plans for looking at the oh-so-sordid knitting world of Ravelry.

I reformatted it in the hope that the edu stuff had been installed later but guess what? Yup, it's all factory-installed stuff. And possibly even worse - the wallpaper is now a photo of some saccharine children and their father, sitting on the grass, staring intently at a notebook. Actually, since the father is actually screwing his face up, I can only conclude that ants have got into the laptop and are running amok on the screen, or his children have both farted.

Just look at the ickness of it all: 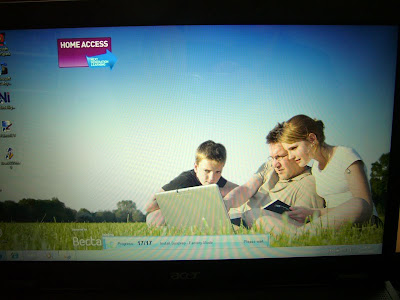 Tomorrow I'm taking it back to the shop and I shall ask that they do a clean install of Windows 7 without all the government nonsense. Possibly from one of their own OS discs. Really, they should have done that in the first place - surely they should have known that the NetIntelligence program would prevent internet access.... especially in view of the fact that the man in the shop told me that loads of parents just immediately sell their kids' laptops, so it is a common enough practice for him to know about the net nanny prog, and all the other spazzatura.

Grrrrr. And actually, while I'm at he should have picked up that the GPU on my HP was failing. When I spoke to him yesterday, I told him that I'd tested out so many different things in order to discover what the issue was, and he admitted I'd done more to check than he had!

So I am not a happy camper: I've had over a week of tech problems which has meant I've not been able to work properly, plus it's cost me £360, which was more than I paid for the HP brand new, and which I could have done without spending, particularly in view of having to pay my tax bill yesterday too. And I'm STILL having to use my old ageing-hamster-powered dinocomputer.