Well here's a thing....I have freckles on my arms. Who knew?!

Thanks to my paternal Italian genes, I have always tanned easily but in the UK, it's generally not warm enough for me to want to uncover, ergo. There have been a few occasions - such as when I was working on the permaculture project - that I'd be out in the sun in a strappy vest, and became tanned; however, for the most part, a tan is not something I generally sport in the UK. And I would nail my tongue to a table before going on a sun bed or getting a fake tan! Ewwww!

My English mother, on the other hand, was a pale-skinned redhead, who had loads of freckles, and I am supposing that this is where my new found 'dottiness' has come from. At work at the Kids Home Foundation, I spend most of my time outside, and when not at work, I'm usually out and about. Of course, here in Chiang Mai, it is the hot season (although TBH despite amato mio finding 38c too hot, it doesn't feel overly warm to me. It does get very sticky though.), so I am living in loose trousers and strappy vests (style did not get on the 'plane with me, I'm afraid!)...which means I am becoming browner. Today I noticed that my arms have rather a lot of freckles....I'm tempted to take a pen, and join up the dots to see what picture I get! On a more serious note though, now the smog has cleared, I should be more diligent about wearing sunscreen. I'm not entirely convinced about the whole skin-cancer from the sun's rays argument but it's probably best to not take chances, eh?

On a more watery note, it's now Songkran (New Year), and here in CM, the celebrations last for several days, during which time, unless one stays indoors the whole time, the chances are, soakings will be in abundance!

Yesterday at work we made Songkran decorations with the children, and then played a game with water bombs we'd made with balloons. It was a lot of fun....but I didn't get wet! After work, my lovely friends, LiLi (who is a wonderful artist) and K'Poon (who is also wonderfully-talented), and I drove around the city on errands....if K'Poon's car had been a convertible, we would have been soaked!

Later on, amato mio and I decided to run the gauntlet of Huay Kaew Road, and to Kad Suan Kaew (a five-minute walk away) to stock up on groceries. He managed to run away from most of our aquatic assailants but by the time we got to the shopping mall, I was completely drenched from head to toe! I didn't mind one bit - it was warm, and it was fun! Revenge was ours however, because we bought a couple of super-soakers, filled up at the tap very thoughtfully provided by the Chiang Mai Orchid hotel, and let rip! I can honestly say that I don't believe I have ever laughed so much with random strangers! I had to wring my clothes out over the balcony though, before entering our apartment!

Today and this evening, we're staying in because we both have work to do, and actually we've only ever spent an entire day and evening in our apartment once, I think. It will be quite a novel experience! Tomorrow however, will be a different story. I shall put on my bathing suit and a pair of lightweight trousers, lock'n'load the super soaker, and engage in some gratuitous water-warfare....not least because some friends have thrown down the gauntlet!

For those of you who cannot be here, feast your eyes on this video from a few years back...

In Praise Of Clear Skies And Easier Breathing!

The smog has cleared and we can see the sky at last... and it's beautiful! It's funny how much we take things for granted - back in Europe, we never really gave the sky a second thought, other than to look at it to see if it was going to rain!

And then in Dorset (UK), we discovered the stars, and gained a new appreciation of the sky. But we still didn't pay much attention to it afterward.

On the 'plane to Thailand, it was amazing to look down from the sky to see the land and the mountains below (especially the mountains!), yet once we got here, we found the sky had 'disappeared' because of the smog from the field and forest burnings. In additions, I found I was coughing quite a bit (which is disconcerting, not least because I am not a smoker), sneezing and awful lot, and have had very itchy eyes... although these last two could be due to hay fever (and the aircon!). The thing I really noticed was how dirty my teeth felt almost as soon as I left the apartment... not good when I'd brushed not five minutes beforehand!

We didn't really think about the lack of sky-vision too much... until a couple of days ago when we noticed that there were clouds! Beautiful white, wispy clouds! We had a full moon on Friday, and were actually able to see its aura/halo. It was amazing!

We had another downpour yesterday evening, and today, the sun is bright and the sky is blue. Long may it last!

We can also see Doi Suthep from our condo now, and it too is truly beautiful. How cool to live within sight of a mountain! I love Chiang Mai... almost as much as I love Venexia! 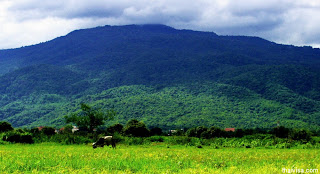