30 Things: #3 - Describe your relationship with your parents

I have no parents. That was easy.

30 Things: #2 - Describe three legitimate fears you have, and explain how they became fears.

1. Heights... serious, serious issues with heights. I have no idea why or how - survival instinct I suppose! I try my best to get over it though; one tactic was when I was living in Thailand, to go onto the roof of our condo and walk ever-closer to the edge (the wall was lower hip height for me, so v.scary). I found that taking my camera really helped because my desire to take cool photos took my mind of my shaky legs!

I also rode a huge elephant through the jungle, down some very hair-raising slopes. My eyes leaked during the last five minutes when I actually thought I was going to plummet to my doom... but Dodo, my lovely ele, stopped, let me off, then 'protected' me while I regained my composure and got back on his neck.


I found this excellent blog post from Cherishing Hopes and Dreams, via Pinterest - do read it, it's such a good idea. So good in fact, that I, along with many other bloggers, have decided to create a month's worth of posts based on the list.... although because I'll be on the road soon, mine will likely take more than a month!

I think it would be rather fun if you joined in too, and if we could all link to each other's blogs, and perhaps learn a bit more about each other. What do you think?

Several people have asked me what it's like to live here in Taroudannt, and some from MFP have remarked that I don't seem to be eating much Moroccan food... so I thought I'd write a quick blog post on the matter!

Everything we eat is Moroccan... but maybe not what most people's perception of what that is! 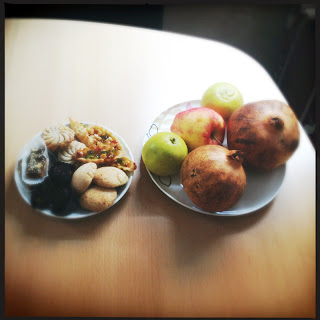 We live in a very small city around 50,000 people; it's not at all touristy, and only has a few restaurants. There are a handful of street vendors and several little open-fronted cafés which sell cooked food. However, it's all tagines... with meat in! There are two restaurants which will make us vegetable tagines but everywhere else, it's carnivore heaven!

There is not a culture of eating out here (the only people who seem to use the restaurants are foreigners who only ever stay two nights at most, on their way to and from other places!); most people cook at home, as I do. There is a wealth of fresh fruit, veg, herbs, and spices, plus lots of pulses... and of course, couscous!

Apart from our rent and bills, which come to around 23 USD per day, we spend on average, 6 USD per day on food (that's everything for breakfast, lunch, dinner, snacks, and water) and household items (cleaning products, toilet tissue, etc.) - less than 30 dollars a day for all of our needs! Cool eh?

Food is very cheap here; for example, olives are 12 dirham - around a dollar per kilo, cherry tomatoes are 5 dh a kilo, and a loaf of khobz - flatbread - is 1.2 dh. Most people however, have very little money. There is high unemployment, which means that although the minimum wage is set at 3,500 dh per month (403 USD), in Taroudannt, most people only earn around 700 dh per month (80 USD). There are so many men clamouring for work here, employers can get away with paying as little as possible. People work seven days a week, often until quite late at night. Most women here do not appear to go out to work - apart from anything else, I don't think they would have time to do a job outside the home!

It's a very hard life for the locals (harder still for those in the villages): there are no supermarkets here, no pubs, no clubs, no cinema, no trains, no fast-food places, nowhere to buy alcohol (not that I am aware of), no TV dinners, no processed foods aside from Laughing Cow cheese triangles, the occasional pack of fairy cakes, and some biscuits, plus very few modern western influences, barring satellite dishes, mobile 'phones, and the occasional knock-off tee shirt or hoodies! There are not many modern cars either - but there are lots of horses, donkeys, and carts!

Yet with little time, and little money, people here are among the most generous, both materially and spiritually, I've ever met - I have the utmost respect and fondness for them. On Saturday, my usual herb seller had run out of parsley, so I found a little old man who had a few bunches he'd no doubt either grown himself, or had purchased for a few dirham in order to sell on to make a very small profit (a huge bunch of herbs costs 1 dh to buy). Not only did he throw in a bunch of verbena for me to try but he offered to share his pomegranate with me too! On Friday, our neighbour called around to welcome us to our new home, and to present a gift of fresh fruit and Eid sweetmeats!

There is no state welfare here but despite the unemployment, no one goes hungry. They have family welfare here instead - people look after each other. If someone has no family, friends and neighbours will help. In fact, this has been true of every Muslim country I have been to. Leaving aside religious fanatics and fundamentalists (of which I have seen no evidence here), Muslims are the very soul of gentleness, kindness, and compassion. They are good people.

People here are very friendly too, and every merchant we go to teaches us how to speak Berber or Darija - every child/teenager wants to practise their French on us, and even a little English too sometimes! Our daily lives now consist of speaking a mixture of five different languages: Berber, Darija, classical Arabic, French, and a little English... six if you include our comedic miming/sign language! At first though, people used to stare at us (and some were distinctly wary) but now they say hello in the street, hug us, shake our hands, and invite us to join them for tea (we both love Moroccan mint tea)! Most of the merchants now charge us local prices (although occasionally we'll try a new one who will attempt to inflate costs!), and some even give us discounts. Most of them offer us freebies to try, especially when they get new biscuits or olives in! Yum!

I adore living here; I loved Thailand but this is so completely different. It's like stepping back in time to a gentler age, where people care for each other (although they do in Thailand too, of course), where they look after each other, and where they have time for each other. Unlike Thailand however, there is not the sense that the western world is going to take over any time soon. Chiang Mai was fantastic but there are a lot of western expats, and a myriad tourists - if Taroudannt has any westerners living here beside us, we are not aware of them, and as I said before, there are few tourists, and those who do come, don't stay long because really, there is very little for tourists to do here... which suits us down to the ground!