So the five themes for this CPSH are: 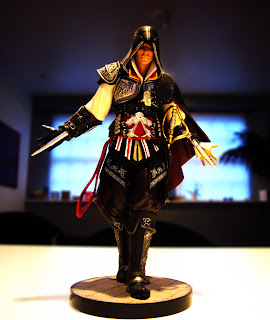 It's probably fair to say that I may be a teeny bit obsessed by the Assassin's Creed series. OK, let's be honest...with Ezio Auditore! Nevertheless, the soundtracks to the games make for brilliant running music. When I first started running last year, I was completely rubbish, and found it so difficult; however, this music really helped (and still does), and the images of Ezio it conjured up in my head completely inspired me. If I were a child, I could admit to imagining I am actually running through the calle of Renaissance Venexia...as a 48 year-old woman though, it's probably best not to!
2. Something I made 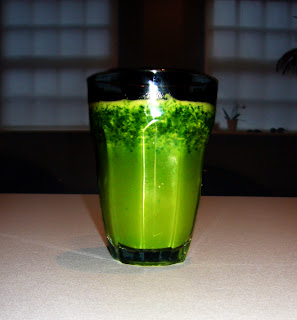 Green Demon Juice! Whizz together 350ml pineapple juice, the juice of half a lemon, half a teaspoon of grated ginger, and about 20g fresh spinach. Nom at will!
3. Motifs: Geometric 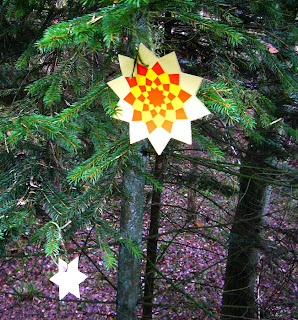 This really had me stumped for ages! I looked all over my house for something suitable to photograph but nothing grabbed me. I took my camera out with me everywhere I went but no inspiration came. Then on Christmas Day, amato mio and I went for a walk in Salcey Forest to gather some greenery with which to make the table centrepiece, and guess what? There it was...the perfect photo!
We were high off the ground, having decided to go up the aerial walk, which offers spectacular views of the forest (but is rather scary to a height-wimp such as myself...especially at the top of the tower with the wind gusting. Eek!), and halfway along the walkway, we saw these wonderful little card decorations which someone had placed in the trees. There were about six of them, all fastened with bio-degradable string. Bellissima!
4. Colour 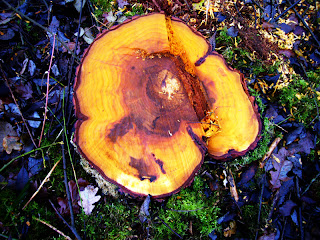 Again, on our walk through the forest on Christmas Day - I suddenly spied some felled trees and was instantly struck by the intensity of the colours, made all the brighter by the recent rain. I had to hop over a ditch to get to them, and narrowly avoided twisting my ankle, but I think the result was well worth it!
5. Festive 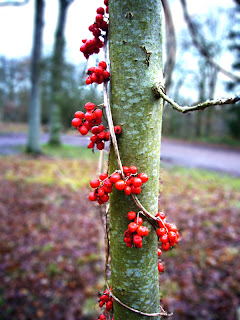 I made a little book tree for amato mio - unfortunately I could not get a decent photo of it all lit up, so here's another pic from our walk in Salcey Forest on Christmas Day morning! I love how someone has made the effort to entwine these berries around the trunk of this tree. So simple, yet so effective...and definitely a bit of a 'wow' moment when we happened upon it!
~~~


January's Crafty Photo Scavenger Hunt will be hosted by the equally lovely Rachel, over at her appropriately-named blog, The Awesome Lady, where the themes are Inspiration, Something I Made, Outdoors, Details, and Motif: Animal. I really hope you'll join in as well!
Posted by Unknown at 20:29

Email ThisBlogThis!Share to TwitterShare to FacebookShare to Pinterest
Labels: CPSH

All lovely, but that tree stump is particularly gorgeous! :) Thanks so much for taking part! x

Great Photos! I like the colours of the tree stump and the berries on the tree are so pretty :)

Thank you both; I think finding those was a lovely start to Christmas day...such beautiful gifts!