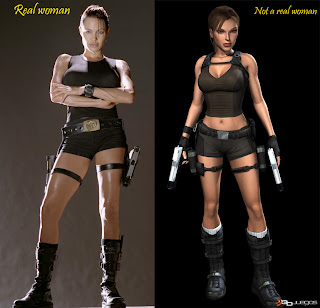 Original image credits unknown
For the past few years, curvy has been used as a euphemism for being overweight, and taking it to extremes, for being downright fat. I have curves and I am overweight....but true to my gender, I am female-shaped, not curvy! That is to say I have a distinct bust, waist, and hips - in fact, it's probably fair to say I have an hourglass figure - but I am still 20-25lbs overweight. Thing is, what happens when I get back to my goal weight? When I am once again slender and toned....will I cease to be a real woman? OMG....will Doctor Noonien Soong come along in the night, steal me away, and in my place, leave an android? Or will the Tyrell Corporation send a Nexus-6 to replace me? That being the case, I should point out that it had better be an Avanced Pleasure Model because otherwise amato mio is going to spot the difference!

While I accept that for some people, what others think is very important to them, my point is that I believe it shouldn't matter what others' opinions are - what is important is how *we* view ourselves. I really don't think we should rely on other people's opinions in order to feel validated - our own self-esteem should be our motivation, surely?

While discussing this with friends, one pointed out that the Media pushes images of what she termed, 'almost anorexic models', and the notion that this is what people should be striving for. I have to admit that I never read newspapers, and the only magazines and periodicals I read are Intelligent Life, and one or two food publications, so I'm not bombarded by imagery of overly-slender girls. But even if I were, I have enough savvy to appreciate that these models are likely to be less than half my age, and that the images have been heavily Photoshopped (it works both ways however - some overly-thin models and celebrities actually have post-production pounds added on). Furthermore, if someone truly believes that being Photoshop-thin will make their lives wonderful, then packing a few extra pounds is the least of their problems. And if they think that being more slender will make people have a better opinion of them, then they really need to be self-reflecting a bit more! If people started being more well-disposed toward me because I was a UK10 instead of the UK14 I am now, I'd have to question whether I wanted to associate with those kind of people....and yes, that goes for employers too.

Regarding the Media, in my view, it's between a rock and a hard place; it needs to promote slender ideals in order to receive advertising fees but also (in some cases) feels a duty to point out that being underweight is not healthy. Unfortunately it often goes too far in the opposite direction by claiming that it's OK to be very overweight, as long as it's called 'curvy' and not 'fat' (obviously obesity is an entirely different matter). Therefore, on the one hand we have people starving themselves in order to look like supermodels, and on the other hand, people troughing because the magazines say it's alright to be fat. There is no balance!

If only as much time, resources and energy were put into Photoshop exposés; the Media is so powerful - most people believe anything it tells them, so why not put that power to positive use, and really bring home the fact that no one in real life can ever be as perfect as a cover girl image?


And that is, I think, the crux of the issue - that most people really will believe almost everything they see and read in the Media, especially when it plays on their insecurities. Can it therefore, really be blamed for exploiting that for the sake of making money? On the one hand, yes, of course it can because it is completely aware of what it's doing, and is taking advantage of others; however, on the other hand, it exists primarily to make money, and in that respect, it is no different to any company which pushes any other product or benefit. Do people make a big fuss about cosmetic companies misleading people with implied promises of glamorous lifestyles (leaving aside the CGI-aspects - I'm talking about the underlying message)? Does anyone ever point out that merely eating a certain breakfast cereal is not going to make one look like the model in that red dress? Does anyone ever complain about chocolate manufacturers for daring to use slender, gorgeous women in their advertising when we all know that chocolate has a tendency to make one's clothes shrink?(!) They are all selling us lies, yet the one we pick up on and choose to burn in effigy is the Media, not the advertising industry! I find it curious that we'll readily accept the lies of some, yet vehemently reject others.

But there is a such a simple solution; be yourself, be who you are, do things for yourself, and stop worrying what other people think. Be your own motivation. I guarantee you'll have a happier and more fulfilling life if you do.
Posted by Unknown at 11:51

The mum of all trades said...

As someone who has to take medication to stay healthy and keep a safe amount of weight on, I feel like screaming at people who moan about their shape, 'count yourself lucky you are healthy!'. But all people can see is outward appearance that is important.

You are so right, M-o-a-T...too many people spend far too much time obsessing about their appearance, IMO, and not enough time on actually being strong and healthy. I have to admit that I do care about my appearance but not to the extent that it's the be all and end all - health comes first!

I wonder if men behave like this? I bet they don't!