Incidentally, a little while ago, I read a wonderful definition of true love, as described by an introvert:

"True love is better than being on your own!" Isn't that fabulous? And so true too!


So here are a few common misconceptions about Introverts (not taken directly from the book, but based on my own life experience):
Myth #1 – Introverts don’t like to talk.
This is not true. Introverts just don’t talk unless they have something to say. They hate small talk. Get an introvert talking about something they are interested in, and they won’t shut up for days.
Myth #2 – Introverts are shy.
Shyness has nothing to do with being an Introvert. Introverts are not necessarily afraid of people. What they need is a reason to interact. They don’t interact for the sake of interacting. If you want to talk to an Introvert, just start talking. Don’t worry about being polite.
Myth #3 – Introverts are rude.
Introverts often don’t see a reason for beating around the bush with social pleasantries. They want everyone to just be real and honest. Unfortunately, this is not acceptable in most settings, so Introverts can feel a lot of pressure to fit in, which they find exhausting.
Myth #4 – Introverts don’t like people.
On the contrary, Introverts intensely value the few friends they have. They can count their close friends on one hand. If you are lucky enough for an introvert to consider you a friend, you probably have a loyal ally for life. Once you have earned their respect as being a person of substance, you’re in.
Myth #5 – Introverts don’t like to go out in public.
Nonsense. Introverts just don’t like to go out in public FOR AS LONG. They also like to avoid the complications that are involved in public activities. They take in data and experiences very quickly, and as a result, don’t need to be there for long to “get it.” They’re ready to go home, recharge, and process it all. In fact, recharging is absolutely crucial for Introverts.
Myth #6 – Introverts always want to be alone.
Introverts are perfectly comfortable with their own thoughts. They think a lot. They daydream. They like to have problems to work on, puzzles to solve. But they can also get incredibly lonely if they don’t have anyone to share their discoveries with. They crave an authentic and sincere connection with ONE PERSON at a time.
Myth #7 – Introverts are weird.
Introverts are often individualists. They don’t follow the crowd. They’d prefer to be valued for their novel ways of living. They think for themselves and because of that, they often challenge the norm. They don’t make most decisions based on what is popular or trendy.
Myth #8 – Introverts are aloof nerds.
Introverts are people who primarily look inward, paying close attention to their thoughts and emotions. It’s not that they are incapable of paying attention to what is going on around them, it’s just that their inner world is much more stimulating and rewarding to them.
Myth #9 – Introverts don’t know how to relax and have fun.
Introverts typically relax at home or in nature, not in busy public places. Introverts are not thrill seekers and adrenaline junkies. If there is too much talking and noise going on, they shut down. Their brains are too sensitive to the neurotransmitter called Dopamine. Introverts and Extroverts have different dominant neuro-pathways. Just look it up.
Myth #10 – Introverts can fix themselves and become Extroverts.
A world without Introverts would be a world with few scientists, musicians, artists, poets, filmmakers, doctors, mathematicians, writers, and philosophers. That being said, there are still plenty of techniques an Extrovert can learn in order to interact with Introverts. (Yes, I reversed these two terms on purpose to show you how biased our society is.) Introverts cannot “fix themselves” and deserve respect for their natural temperament and contributions to the human race. In fact, one study (Silverman, 1986) showed that the percentage of Introverts increases with IQ.
“You cannot escape us, and to change us would lead to your demise.” <-- I made that up. I'm a screenwriter.
It can be terribly destructive for an Introvert to deny themselves in order to get along in an Extrovert-Dominant World. Like other minorities, Introverts can end up hating themselves and others because of the differences. If you think you are an Introvert, I recommend you research the topic and seek out other Introverts to compare notes. The burden is not entirely on Introverts to try and become "normal." Extroverts need to recognize and respect us, and we also need to respect ourselves.
The book he mentions is The Introvert Advantage (How To Thrive in an Extrovert World), by Marti Laney - so I've put it onto my Kindle wish-list as it looks quite interesting.

Myth #11 - Introverts do not stand out from the crowd!
"You're an introvert? - you seem so gregarious though and you dress in eye catching garments."
This is what one of my friends has just said to me after reading the above! Yes, I have a penchant for unusual and individual clothing, always have. Ask any of my old schoolchums - they'll tell you I've always stood out from the crowd! Introverts can wear PVC and thigh boots, or an eclectic mix of chunky boots and antique/vintage clothing just as well as extroverts....better probably, since we are able to express ourselves in our own individual manner, and not simply re-create something we've seen on someone else or in a magazine, shop window, film, or on TV (not that I am in any way suggesting that the majority of extroverts are sheeple)! And gregarious...with the right people, certainly - but we are highly selective about who we socialise with. We never do it for the sake of it! 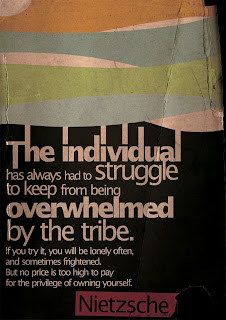 This is dead on! My husband is an introvert and recognized himself in all but two (saying that he does not try to push the norm and has never considered that he needed fixing). He did note the book and author. Somehow, it made him proud to know that others are like him too.

I think that when one is in a minority it can feel very lonely at times, especially when the majority seems to want everyone to be like them. I've never felt the need or desire to conform but I've certainly felt the pressure.

I've never felt I needed fixing either but it saddens me greatly that some people really do feel like that. Good for your husband for standing apart from the crowd!