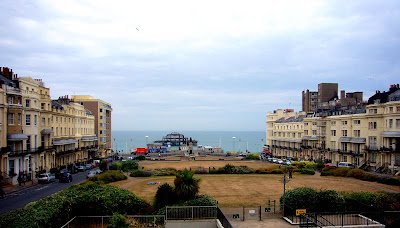 Last Tuesday Kevin and I headed off to Brighton for the Develop conference. It was Kevin's turn to book the hotel for our overnight stay, and as usual, he opted for the quirky choice; The Artist Residence, on Regency Square.

The girl at reception was welcoming but didn't know we'd paid in full up front; she couldn't find any record of our payment! Fortunately she eventually came across it!

The room, whilst looking fun and funky, was exceptionally small, particularly the bed, which was described as a double but was in fact tiny. In addition, it was very uncomfortable and there was only one thin pillow each. No extra bedding was provided.

It was a very warm night but we couldn't have the window open, due to the noise of drunken revellers outside. That and the fact that the other hotel guests were incredibly noisy; slamming doors, very loud voices etc. and one even vomiting very loudly meant we got less than an hour's sleep. This wouldn't be so bad if we weren't at a conference and in meetings the next day.

Breakfast was rather lacking; a cold croissant (with no preserves or butter), bottle of room-temperature water, a small apple and a Nutrigrain bar (which I'm not sure even counts as food!), left in a bag outside the bedroom door. I have no problem with the casual attitude of breakfast-in-a-bag but in all honesty, I have stayed in far better hotels where I've paid less per night, and had a full English breakfast plus yoghurt, fruit, pastries, cereal and toast!

We would have liked to sit out on the balcony to eat our breakfast; unfortunately, the scaffold planks were very wobbly and didn't seem very safe, and the chairs were covered in bird guano! I don't think they'd ever been cleaned, especially as there was a large pile of droppings to the left of the balcony - clearly below a favoured roosting spot!

The advertised WiFi didn't work. We had to ask for the passkey as it was not volunteered; unfortunately it only connected us to the WLAN, not the internet, so we had to go out to a café in The Lanes in order to check our work emails!

We didn't have much time to watch TV, which was just as well because there was no reception, other than Film4! I would however, have been grateful for it in the small hours when I was being kept awake. Thank goodness for my laptop and BBC iPlayer!

Perhaps most disturbing of all was the lack of smoke alarm in our room. I say lack - there had been a smoke alarm once; however, when we were there, all that remained was the plastic base plate screwed to the ceiling, with a few bare wires dangling from it. I'm pretty sure the hotel was breaking the law by not having a working smoke alarm in the room.

The one really positive element was the shower! Granted the en-suite was quirkily bijou (it was in a cupboard) but the shower itself was wonderful. Very powerful, and the water very soft. A real pleasure to use.... even if the cubicle could have done with being a bit larger! Nice complementary products too (Bee Kind).

To sum up; in principle, I love the quirkiness of The Artist Residence but in practice I found it to be poor value and very uncomfortable. I wouldn't recommend it to anyone wishing to get a good night's sleep, or requiring a decent breakfast. 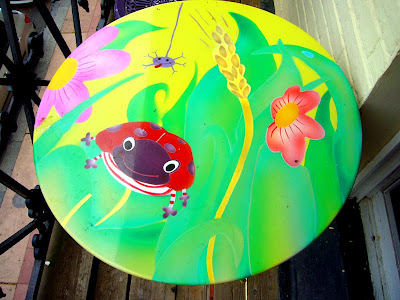 The table was really sweet - shame all the bird poo prevented us using it! 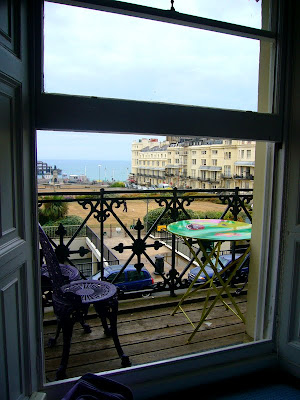 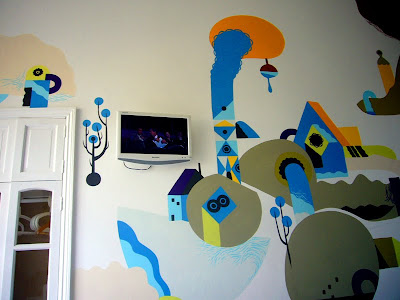 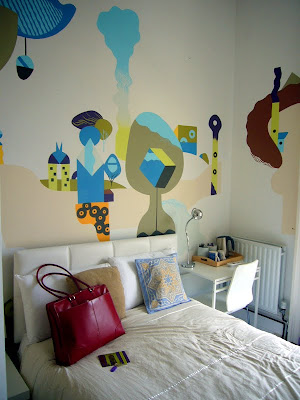 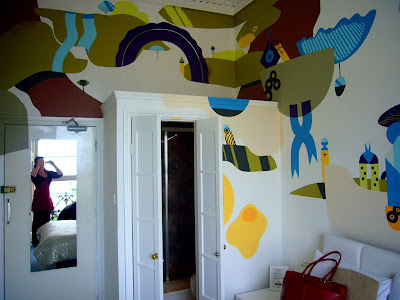 This cupboard houses the shower cubicle, washbasin and loo! You can actually just see the loo if you look toward the bottom panel of the right-hand door!