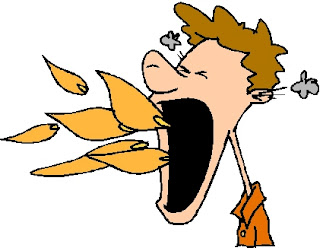 It's no secret that I am passionate about good food, and part of that passion extends to sharing meals with friends and loved ones. While I adore cooking, I take little pleasure in eating alone, no matter how good the food is. For me, sharing a meal is always an occasion, and it's a chance to catch up with loved ones' daily news, with friends old and new, and with family. I absolutely love long, lazy meals, where everyone talks, and laughs, and before you know it, several hours have passed! I was rather surprised therefore, to be told by my friend, Shana (who is the editor of the Chiang Mai Mail), that her in-laws would bolt their food down as quickly as possible. In silence. As it seems, did everyone else in the region. This was their culture; mealtimes were not a social occasion, they were to be dispensed with as quickly as possible... and the reason for this was the spiciness of the food. My friend was told that it was best to wolf the meal down as fast as possible to minimise the possibility of pain from the chilli!

I've thought about this quite a bit since, and I just cannot get my head around it! I can find no reason why anyone would make their food so spicy that they would have to trough it really fast, and presumably, not even really taste it. For me, I take great pleasure in the taste and texture of food (as well as in its appearance and aroma of course). I like to savour every mouthful, and to take my time eating. Something I actually really dislike is feeling I am being rushed to finish a meal.

Leaving aside speed-nomming, I have heard it mooted that spicy foods were/are to mask the smell and flavour of rotting/spoiled food; however, this makes no sense to me at all. Why would you risk food poisoning which would mean you, and others who ate with you, would be incapacitated, and therefore unable to work? More likely, I'd have thought, is that it's used to prevent food spoilage; we all know that garlic has antibacterial properties, so it makes sense to use it in a dish which may be required to last for several meals, or one which may be cooked in advance. I suppose therefore, that it follows that other spices and herbs might be used similarly, and that being the case, perhaps the overly-spicy food is merely a natural progression due to tastebuds becoming accustomed to spice, and requiring more to be added so that the food doesn't taste bland. Certainly, one of my former boyfriends ate so much curry that anything which didn't contain spice of any sort seemed incredibly tasteless to him.

Or is it as simple as the heat of hot countries depressing the appetite, and so spices are used to stimulate it, and to aid digestion? Or that hot, spicy food induces sweating, and sweating is a way to cool the body? Is it part of a tradition, harking back to when people believed that spices balanced the humours in food? Or is it simply that because of their medicinal properties, incorporating spices into food is a good way of ensuring we stay healthy?

I do have a theory that spices may contribute to the body producing a natural insect repellent - unfortunately since I cannot tolerate overly-spicy food (too much actually makes me ill), despite trying to acclimatise myself to it for the past few months, I can't really test out my theory because the food I'm eating still isn't really, really spicy. Amato mio on the other hand, can tolerate a lot more spice than me, and he rarely gets bitten, whereas I am a veritable feast for mosquitoes here in Thailand (never in Europe)! But that could be coincidence!

I understand using spice as a flavouring and to enhance dishes, I understand the medicinal applications, I understand its use as a preservative, and even for ritual purposes but I honestly don't understand it as in instrument of torture in one's food, especially not when people who are used to highly-spiced foods find it painful!
Posted by Unknown at 11:33

Spot on! A lot of Thai people will force themselves through a spicy meal and be in pain halfway through it! I don't get it, but I do like a bit of life in my Thai food.