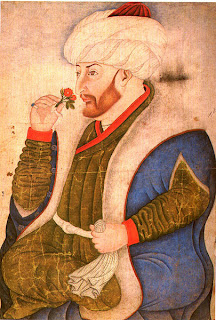 Sultan Mehmed II smelling a rose, from the Sarayı Albums. Source: Bilkent University
When I don't have a migraine, I've usually got an almost-constant headache. Being outdoors seems to be the only way to alleviate the pain for any length of time.

Running definitely helps! Using nasal strips however, means I pick up every area marked by wild animals, cigarette smoke from a hundred metres, and goodness knows what else. Often it's actually quite nauseating! When I've been running or working out, I can smell the salt in my sweat! And weirdly, chlorine! OK, it might not be actual chlorine (although when I used to swim every morning, it most definitely was), but something I am sweating out does make me smell as though I've bathed in bleach. Thankfully, no one else smells it!

Along with the headaches and migraines, I've had hyperosmia for as long as I can remember, and they all become more acute as I grow older.

My biggest bane however, is being able to smell my neighbours' cigarette smoke, despite my doors and windows being closed (I can rarely have my back doors or any windows open - fortunately it's hardly ever warm enough in the UK for me to want to!), and even being bunged up with hay fever, I can still smell it when they are puffing away. In addition, there's a working men's club about five metres from the back of my house, where the clientèle are outside, puffing away from the time the club opens (10am) to the time it closes....sometimes not until 2am. I work from home, and sometimes it is so bad that I cannot even be in my workroom, which overlooks the club. This is the downside of the smoking ban in the UK.

I used to have a neighbour whose deodorant I could smell when he sprayed it every morning, and I always know exactly which shower gel amato mio is using when he is showering in the downstairs bathroom, even if I am in the bedroom, at the top of the house, with the door closed! Don't even get me started on the food smells from my neighbours' houses!

I also get olfactory hallucinations when I have a migraine... and that is just plain odd! When I was a child, I thought it was evidence that I had ghosts watching over me, keeping me safe! Mind you, I was also convinced that the tinnitus I experienced was alien radio communications! It's possible that it was inevitable I'd grow up to be a SciFi geek!

On a day-to-day basis, my hearing is very sensitive too - I assume this is connected to the hyperosmia. Or maybe I'm just lucky. Not. Yes, it's great that I can hear really well....until it comes to trying to get to sleep. And staying asleep. I hear everything! My friends, Ales and Gemma, recommended BioEars to me - little pieces of malleable silicone which go right into the ear. They told me they worked really well for them. I envy my friends - BioEars don't work for me. Sometimes, I do, quite literally, cry with frustration and fatigue. Of course, the lack of sleep fuels the headaches and migraines. I can almost guarantee that after a couple of consecutive nights without sleep, I will have an attack on the third day.

Does having hyperosmia mean I cannot use perfume or scented products? Not at all, I really appreciate them... although there are some which don't sit well with me (some green scents for example, especially 'ferny' ones). I go into a Lush store, and it is like a fantasia of colour and light...imagine watching the best firework display ever - that's what it's like for my sense of smell! I can usually pick out individual scents from products, and have over the years, learned which combinations work really well. Very useful when indulging in one of my hobbies - soap and toiletry-making!

Having said that, the above really only applies to natural products; artificial chemical scents very often hurt - household cleaners are a bit of a minefield. Toilet cleaner is particularly bad, even Ecover. The worst offender in this group however, is anything banana-scented. Real bananas are fine (I love them!) but artificial banana scent not only makes my eyes water and my nose scream for mercy, it causes my throat and chest to become tight, and feel as though they are going into spasm. I once bought some 'amazing miracle' stain remover for my seagrass carpet to deal with a wine malfunction....I thought I was going to die! I actually did throw open all my windows, even though it was freezing outside. And I vacated the house for several hours! It makes me cringe to think that this stuff (not the cleaning product!) is put into children's sweets, cereals and milkshakes.

On the plus side - having hyperosmia is really useful to me as a cook; not only can I smell individual ingredients but the hyperosmia enhances my sense of taste too! It's no wonder that food is one of my greatest pleasures - it's so sensual (and not in a Nigella way)! It also means that I can eat in a restaurant or at a friend's place, and re-create almost any dish at home (plus it's handy for working out approximate nutritional values because I am nothing if not anally retentive about such things)! The food aspect alone makes up for any negativity of having this condition!

In conclusion, although at times it seems to be an inconvenience, or at worst, a curse, it has been possible to turn hyperosmia to my advantage. If there was ever a cure, don't think I'd actually want it; I suspect that despite the negative aspects, I'd be utterly lost without my olfactory super-power! 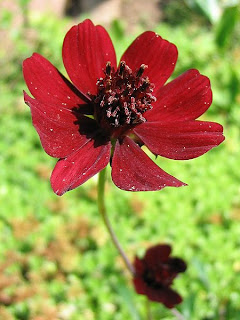 Email ThisBlogThis!Share to TwitterShare to FacebookShare to Pinterest
Labels: musings

Fascinating stuff! I can definitely smell more things than most people - as I walk down the street I can identify the perfume or deodorant of most passers by. Fortunately the accentuated bad smells are mostly smoke which, like you, I'm particularly sensitive to. With the windows shut I wake up in the night if the chap downstairs lights up.

Like you I also have a rare blood group, B-, which only 2% of the population have.

My experience of synaesthesia is I can feel colours with my fingertips. I don't see it as a super-power, as a child I read of someone who could do it and taught myself, practising with Smarties! Yellow feels slimy, and red feels smooth, for instance. Give it a try!

Sounds like a great excuse to indulge in Smarties! I had no idea it could be learned - I must try it!

In a similar vein, with my eyes shut, I can tell when things are close to my nose because the bridge vibrates! The closer something gets, the more intense the vibration! It was years before I could wear sunglasses because of it! And when I first had to have reading glasses, it was quite difficult - even now, I cannot keep them on for long because I find myself physically trying to 'back away' from them! I have to regularly take them off and have a break!

It's so refreshing to find other people with quirks! I grew up thinking I was the only one! LOL!

What an interesting read! I find that we have so many similar "gifts". My sense of smell is always on high. I smell any piece of furniture that comes into a building, even two floors away. Would you believe that as I walk past lockers in a school, I can identify the weed smokers? (Like a dog, I am!) I also have the same hypersensitivity for food but some odours I cannot stand, one of them being grapefruit and grated citrus zest. I love perfumes (always thought I should have been a "nez") but unlike you, I can't walk into a "Lush" store or any boutique with scented candles. It's too overpowering.

You and I need to get together and cook!

It is strange reading about how your body reacts with hyperosmia. As I read about people with this condition I am not so sure it is all that rare.

Funny you would call it your super power. I do as well. I also call many smells my Kryptonite.

I am inspired by your outlook on living with this problem. It is quite debilitating for me. I am retired now but when I was working I'm sure I caused others a lot of pain with my constant complaining. I understood their frustration but if I didn't fight my brain would just stop functioning.

I was so looking forward to retiring because I had plans to move to the Philippines. The island life must be a relief from all the city smells, right? Well, it didn't turn out that way. Little did I know Filipinos see burning trash and other things as a sign of life. Burning fire wood is one of the main cooking fuels.

Like you, I have a big problem with loud sounds as well. There again, Filipinos love loud. Seems the love loud anything. They talk loud, sing loud and turn the bass up all the way until the speakers sound like they are going to shake apart.

Wish I could sound as positive as you do but migraines every day are a real problem for me and my family.

Seems that if I don't get away from whatever smell that is bothering me at the time the pain only increases. If I allow this to happen the pain will remain for days if not a week or so.

I just don't think there are enough people that know they have this problem for the medical community to even care to study it and come up with some kind of cure or treatment. Most doctors I have seen and complained about this condition want to say it is psychological. I think they fail to take into account that after dealing with our surroundings and this condition daily, it most likely will become psychological.

I saw something once on a science program about putting something in your brain that intercepts some signal that is sent when you smell.

I hope your readers may have some new information.

Thanks for your article.

I've really enjoyed reading this, I've always thought I was the only one with these rare problems. I too have frequent migraines, but I take Topamax daily as a preventative and have for many years and it has decreased them to 2 or 3 a month instead of daily like yours. I too am able to smell everything! And I love that you guys all talk about smokers, I'm an ex-smoker I hated the way people, myself included, smelled after smoking and yes I think the smoking did dull my sense of smell a little. I am like the you all in the sense I can not go into Lush, but places with milder smells are ok in moderation and I have to use candles and plugins to mask the incoming smells from my neighbors. I live in apartments and I always seem to move by someone who smokes or cooks bad food. And Jujubie like you I can almost always smell pot, it surprises me too, and annoys. I will have to find out my blood type to see if it has any significance.