30 Things: #10 - Describe your most embarrassing moment.

Oh, this is easy, and unfortunately, I remember it only too well!

Boxing Day, 2003. My delightful offspring were spending Chrimbo with their father, as usual (I used to cook Christmas dinner for Shelter on the 25th, then spend the next day in blissful solitude!), and as was my wont, I decided to spend the entire day in my dressing-gown, with my PS2, a stack of games, and with loads of candles alight! Bliss!

And then I heard it... a strange noise from outside. One of my friends said he might pop over to collect his trailer from my garage, so I went outside to say hello. You all know how the next bit goes.... gust of wind, front door slams, keys still in the house... and I'm in my dressing gown and slippers. On the doorstep. In the middle of an English winter. The noise turned out to be nothing more than the garage door banging in the wind.

Since I couldn't get indoors via the front door, I went through the garage, intending to go in through the conservatory. Problem #1: because the kids were away, there was no need to keep the door unlocked. The back door was open though - taunting me through the glass of the locked conservatory door.

I stood awhile, and pondered the situation, going over multiple 'genius' ideas and cunning plans... but to no avail - I kept returning to the one inescapable fact - if I was to get inside, I was going to have to break in. Arse.

OK, I could do this - I'd seen it on TV... just use something pointy in the corner of the glass (yes, it was all double-glazed - of course). Right, toolbox... toolbox... bugger, it was in the utility room - indoors. Right, big shed - domain of two teenage boys - there was bound to be something in there, surely. No. Nothing. Nada. Board games, CD player and speakers, cushions, kettle, chocolate wrappers, coffee mill (don't ask).... nothing remotely useful. What about the gardening shed? Aha... a fork! Two forks - a large one and a small one. Righty-ho then!

This was the point at which I discovered that not only am I a puny weakling but that I also make the oddest of faces when exerting myself (tip: when attempting to break into a house, do not look at your reflection in the window - it's embarrassing). After somewhat gingerly trying to stab at the glass with the hand fork, and failing to even scratch it, I decided to go for the BFG(T) [Big F***ing Gardening Tool]. Several manly-type thrusts later, I came to my second discovery of the day - garden tools are rubbish for anything other than gardening.

Back to the garage then. Again, nothing, a fruitless search.... unless.... Oh yeah, I'd seen the A-Team, I'd seen Star Trek... that kitchen table... yes, the one with the legs which unscrew.... heheh. A few minutes later, I had what looked like a cartoon cudgel, complete with rusty nail sticking out of it (except it was a non-rusty bolt). In my head, I looked like BA Baracus... in reality, it was more likely to have been this... 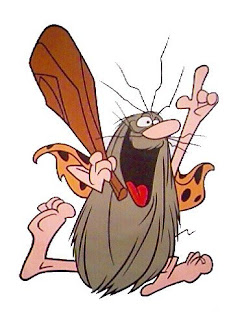 I braced myself, took a deep breath, took a mighty swing... and ended up being propelled backward, falling over the low wall surrounding a flower bed, and ending up on my bum with a throbbing pain in my leg where the 'cudgel' had rebounded and whacked me on the shin. It was already beginning to bruise. I felt completely useless! Probably a very good thing that 'cat burglar' was never on my list of possible career paths.

There was nothing for it, I was going to have to seek help. I'd been living in that house for almost three months, and had never seen any of my neighbours - not that there were many, it being in a very rural location. I picked myself up, straightened my dressing-gown, strengthened my resolve, and went in search of a neighbour. I was shaking as I rang the doorbell - it was after all, the end of December, and I had absolutely nothing on except my fluffy lilac dressing gown and slippers! A fact I was acutely aware of.

As luck would have it, they were home, and as soon as I had blurted out my sad story, I broke down in tears! Pathetic. They turned out to be not only completely wonderful (she loaned me some clothes, and gave me a glass of wine, while he enthusiastically tried out his new angle-grinder on the conservatory door) but it also transpired, that similar things had happened to them too: she had locked herself out of her flat twice - once when a bath was running, and their daughter had done the same... in her PJs when she did the school run. Yes, in her PJs!

A couple of hours or so later, feeling the warmth of a new friendship, wine, and gladness that I could at last get into my house, I bid them farewell and thanks. As I walked into my garden, I could hear voices, and as I rounded the corner of the conservatory, there were the police. And my friend!

Remember my friend who was coming to get his trailer? He'd arrived while I was next door, got no answer when he rang the front doorbell, so went around the back... only to see that the window had been removed from the conservatory door. Investigating further, he went into my house, saw I'd obviously left in a hurry, and rang the police, who responded immediately. I'm not sure who they were less impressed with, me for being a numpty, or my friend for panicking!

I was just so glad I was no longer in my dressing gown!