I've put on a few pounds, which in itself would not be too much of a problem if they had not deposited themselves in all the wrong places. But even worse is that my fitness levels have dropped drastically, which is just horrible. And you'd think that a woman going through the menopause, knowing that one of the symptoms is aching/stiffness, would not be prepared to forego workouts, therefore condemning herself to making old-person noises when getting out of bed, on and off sofas etc.

What kind of numpty would do that? Hmmmm.... So I'm reposting that motivational graphic I did a while back because at the moment, I'm probably somewhere between the centre two images... but of course, I need to be further toward the right!

To that end, yesterday, amato mio and I restarted C25K. And this is what happened: 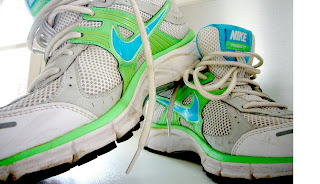 Woohoo! Back to running! I am still on a high from Sunday's 10miler, and training is going great. Hope the bug keeps on biting, dearest GoK!